Woman, her career & other things. 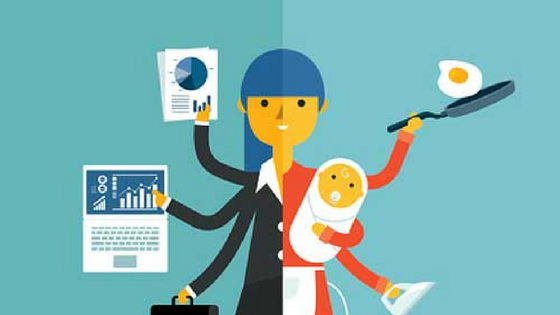 As an adult child of the early-mid '20s(not supposed to know on which group I'm more suitable), I almost can feel the pressure on the air. And it's definitely greater than the regular atmospheric pressure.

In our genre, a woman( sometimes a girl) has to be either of these two types -
one is the brilliant star kid who always comes first (because she has to be way ahead of Sharma Ji ki ladki) in the class or the other homely type who has specialized in household works (or more precisely the winner and the looser).
sometimes these two types get overlapped in people's expectations(for better!!)

These days  I get to see a majority of women are interested or even doing higher studies, but they're not interested (or sometimes allowed ) to be financially free (no offence!).

I can't remember how many times girls my age are being asked to do a masters maybe just to tell people that they're doing it(and probably that higher the chances of coming "rastas").

I mean higher studies, getting degrees n' all are pretty good and important but what is the point of doing all these just to get a ticket to a  become successfully married wife who cannot or sometimes should not go outside and earn for her own self.

I can feel if mothers who are despite being a working woman can think this thought then it is inexplicable to those whose mothers are not.

I have never agreed to this ideology and not going to in my uncertain ( almost no) future.

I hate when people associate a higher degree to more efficient marriage proposals, I mean what's that? Sometimes I  caught people in the middle of conversations who are looking for an educated bride but could not afford to allow them to do a job or like have a career.

And a huge number of women supporting and even indulging this rather classic idea to others is the worst nightmare I could ever imagine for myself and others.

As a part of this society, we are brought up to the idea of respecting degrees more than having an actual job. Maybe that is why a woman working her ass off who comes home late is more hated and judged than a woman who is just a   married housewife with a scholar degree.
And maybe that is why too we are taught to respect an MA housewife than an air Hostess or a model or even an IT employee.

Why is it always that a woman has to choose between having a career or having a family? why just we can't do and design our own lives and in our own time to have both?

We need to ask more about this until and unless society changes its mentality and let us just be ourselves, but that has a long, long way to go. 😁

Khamkheyali said…
Dude! What you are saying is absolutely right... But such things won't go away just like that.. India is a developing country needless to say our gen is suffering the most. Girls need to speak for themselves, in most cases girls are fighting for their cause but parents they just don't get it. Even an early job or good placement doesn't suffice for not getting married.. Sad truth.. Yeah.
August 7, 2019 at 10:50 AM

optimistic.wreck said…
Yeah you are absolutely right and this is why I wrote the entire thing . Somebody should at least speak out about these things publicly or else all the struggles they are dealing with would get unnoticed, I just wanted to gave a voice to the cause and that's it. Thank you for your feedback :)
August 7, 2019 at 11:11 AM

Popular posts from this blog

Co-living Is the Newage Hero: Here are the Best Reasons Why

May 08, 2020
M illennials are more like all work and no play these days. Particularly, for the youngsters living in the career-centric cities of India? But, to be very honest renting apartments and carrying off a livelihood in a new city is not a matter of joke. It costs like a lifetime. When you are switching jobs, that needs to move on a whole another city, it doesn't always come with money backups, does it? Moreover, you have to get adjusted to a completely new lifestyle, without your family and friends. Things are already a bit hard.   Fortunately, Coliving comes to the rescue, and they are quite a lot better than the unfurnished PG stays, we must say.  Reasons for Coliving Becoming the New Saviour Obviously Budget is the Major one! When it comes to Coliving spaces, the utilities are easier to tackle with. The electricity bill or phone bill and even sometimes cable bill is not your responsibility anymore. It's also cost-cutting, for living in an expensive city. You can loo
Post a Comment
Learn more »

3 of the Significant Lessons from Japanese Culture That Mesmerizes Us

April 24, 2020
I was wandering through the Internet, Amazon specifically, for finding self-help books to read and get over myself. When I came across this little book called 'ikigai: The Japanese Secret to a Long and Happy Life'. As I'm always have been a little enthusiastic about Japanese culture, I gave it a shot. Turned out to be one of the best purchases of my life. No, I'm not here for imparting wisdom. I have perceived the 5 life lessons practised by Japanese people, especially by the centenarians living in Okinawa island. Here, without any further ado, let's dive into directly, what I've learnt so far, and what we should all be practising, even a little bit. Wabi-Sabi (侘寂): The Beauty of Imperfection This specific concept is entirely based on the imperfections of things, and the beauty lies with it. It tells us about the impermanence and everchanging nature of life. Thus, people living in Japan emphasize placing value to even the smallest of things, imperfect th
Post a Comment
Learn more »